Book reviews: Man's Search for Meaning and The God Delusion

I was leant 'Man's Search for Meaning'- it's a short book, written by a doctor who survived the concentration camps of Nazi Germany. The point of the book is that we can all find meaning and purpose in life, even in the most terrible of circumstances, and this meaning will sustain us, even in Nazi death camps. The 'meaning' can vary from person to person, and can be anything from the desire to write an academic book to the desire to care for your children. Although this book should be uplifting, I didn't find it particularly so- what stuck with me the most was the author's descriptions of his memories of life in the camps.

Inspired by Dar's post (Dar's posts seem to be my inspiration for all things book related- I also had a clear out of books which I was no longer inspired to read) today I decided that, as I was feeling a bit under the weather, I would sit and read a book, rather than vegging out in front of the TV. 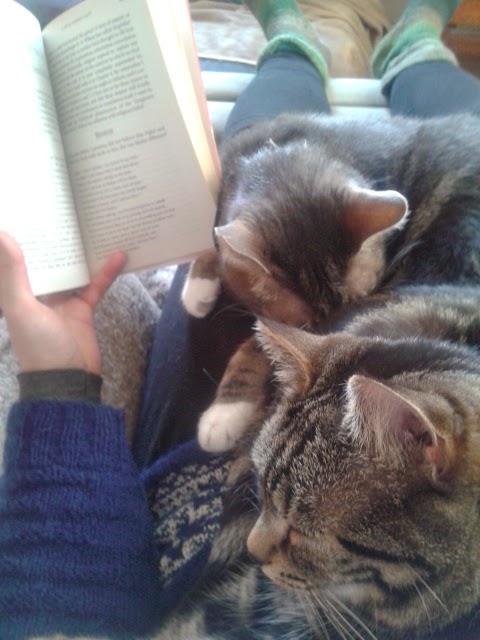 Assisted by two of the cats (Tinkerbell at the front, Merl at the back of the photo), I spent the afternoon finishing off the God Delusion by Richard Dawkins, which I first bought soon after it first came out (I reckon about 7 years ago..). I read about half of it then, and I found it very useful, as I finally properly realised that not being religious was actually an option (duh!). I really enjoyed reading it all the way through this time, as I found it humourous.

The Douglas Adams quote that Dawkins uses in the book is fast becoming one of my favourites:

"Isn't it enough to see that a garden is beautiful without having to believe that there are fairies at the bottom of it too?"

Pretty much sums it up for me.