January 05, 2013
Here are my New Years resolutions- hopefully nice and specific, not impossible and fairly easy to tell if I have done them...they also may change as the year goes on, if I realise that they are impossible or foolish.

1. No alcohol. It may be a sign of age, but over the past couple of months I have had a headache and then felt sick for about a week after even one modestly sized glass of wine. As I rarely drink, this should not be a problem...maybe. I drink in the English style- nothing for months, and then a party with much, much wine- i.e. binge drinking. Yey!

2.  Horse riding- pass ABRS Equitation 5 and Stable Management 7 and 8. (Information here and here, if you are interested). Update- since I made this list, I've passed Equitation 5- just about. Not going to aim to pass 6 this year though, as I don't think I will improve enough.

3. Exercise- do more. Nothing crazy- yoga twice a week (yes, that is exercise!), swimming twice a week, walking twice a week. So far I have been swimming a couple of times- this morning I did 40 lengths, which is half a mile (the pool is very short!).

4. Save money. At the moment I fritter it all away on my hardcore pony habit and serious knitting habit. £100 a month seems reasonable, especially now I am old and my car insurance has dropped considerably. (May have something to do with the fact that I no longer drive a sports car...).

5. Plan meals. So I don't end up eating cheese because I can't be arsed to cook and everything else is frozen. Hopefully this, along with point 3, will result in my ending the year lighter than I started it- but I don't think that 'lose weight' is a very helpful resolution, if you have no plans on how do it!

6. Sleep more. Not as in napping randomly during the day, but going to bed earlier- 9.30pm. I need to accept that my natural waking up time is 5.30-6am (thanks, dad) and thus if I want to not be a zombie during the day, I have to have an old person bedtime. Sigh.

7. Get rid of things that fall into the category 'shit I don't need'. Less to clean, less for the cats to break, less furniture, more room to lay on the floor like a starfish. I've already got rid of some 'stuff' to willinh recipients- the breadmaker, for instance, as I am going to make bread from scratch (see item 13).

8. Read more. I've written a whole post on this!

9. Spend 45 mins a week in the garden making it grow stuff. Mostly thus far I have made elaborate plans but shirked the actual work...first- digging. It's been a bit wet for that so far this year.

10. Knitting course- actually do this. The bits I've done so far have been interesting, but I've not done much of it, as there is always something else to do, such as getting the kitchen sink really shiny, and other such vital tasks.

11. Knitting- get down to two WIPs (work in progress..ess..) and use the enormous collection of yarn I have rather than buying more. (See point 4- knitting addiction vs. saving).

12. Sew stuff. Rather than just re-arranging fabric and thinking 'I should really make something with this.'. My bfs mum made me a dress for Christmas and gave me the paper pattern, so I will make one of those.

13. Learn to make good bread from scratch. This book was a Christmas presents, and first bread attempt went well. No more manky processed bread! So far, bread attempts have gone quite well, and tasted like actual bread. Today's effort (see photo) was made using flour that mum ground herself. (Well, in an electric grain mill- apparently a millstone requires too much effort). 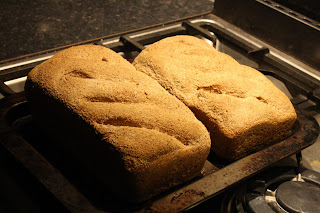 14. Go "no 'poo". No, not some weird constipation cult, but cutting out commercial shampoo, conditioner and cleaning products. Bicarbonate of soda and vinegar are my friends. (Plus lavender essential oil to avoid smelling like a chippy..). I may also experiment with using olive oil as a moisturiser, but I suspect that would result in a greasy face.

I know, it's quite a long list. But if I don't write all of my ideas down now, I will forget them.

Does anyone else have New Years' Resolutions? Perhaps a shorter list than this..?!