A book at bedtime

December 06, 2012
I used to read a lot when I was a child/teenager. We'd go to the town library, I'd check out the full allowance of books (which I think was 8, but may have increased to 12 later on) and by the next time we went back to the library (probably the following week), I'd have read them all. Now that I have to do things like go to work, feed myself, wash clothes etc etc, I probably don't read that many books in a year. (Although I do read the newspaper on my Kindle most days).  This may also be influenced by the fact that if I really get in to a book I find it hard to tear myself away from it to do anything else, such as sleep, and end up knackered and living in a bit of a mess. (Moderation...what's that?!
So rather than watching stuff on BBC iPlayer at bedtime, I am going to start reading, but limit myself to 10.30pm lights out to try and impose this 'moderation' thing on myself. (If I am really tired or it is a boring book, I may fall asleep with book on face, and wake up at 1am, wondering why it's still light).
Although I have a Kindle, I still have a reasonable number of 'real' books which I have never read/ never finished, and quite a few 'specialist' books from my history degree. I have already got rid ofboxes full of books, but there are still plenty. Also, having given away a massive Ikea book case that was half empty, the remaining two bookcases are a little full...it'd be nice to dispense with the massive piles of precariously balanced DVDs (all of which the bf deems necessary) so the plan for the rest of 2012 and for 2013 is to read through the books in my collection that I am not certain about keeping, and donating the ones that I don't want to keep. (Or perhaps selling the 'specialist' ones...) If I'm forcing myself to finish something, it's probably a good sign that it can GO. There are some definite keepers, such as a very battered copy of Jane Eyre that I have read endlessly, and a book that my great-grandmother was given as a prize in 1895. [Edit- mum says this was not a great grandmother, but a great aunt...still...] Plus any current reference books (mostly horse related). 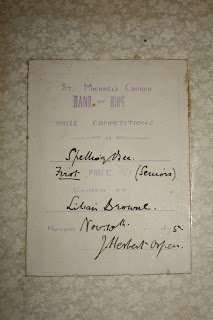 I also used to make massive lists of books that I wanted to read, and diligently worked my way through them. I remember when I was at middle school, I read the list of suggested reading very quickly (probably within a month) and so compiled my own, much bigger list! So, I have made a list of all of my books, and will read through them- not as fast as middle school me would have managed, though! Some of the academic ones have been shamefully under-used, but I am expecting to find some of them interesting now that I am not desperately trying to cram information into my brain and form an opinion for an essay (the writing of which I usually did in four hours on the day of the deadline, without checking through before handing in- how did I get a degree?!)

In no particular order:

1. Mean Time- Carol Ann Duffy (poetry, studied at A-level, many notes)
2. 100 Best Loved Poems (teenage poetry phase)
3. Poetry Please
4. More Poetry Please
5. The Selfish Gene- Richard Dawkins (just realised that this can go, as I bought it on Kindle for the princely sum of 99p. Probably not worth selling on Amazon)
6. The God Delusion- Richard Dawkins- started this on holiday but didn't finish.
7. Discovering Life on Earth- David Attenborough. Child's edition, which I have had for years. Not sure I ever read it cover to cover though...
8. Edge of Blue Heaven- Benedict Allen. Pretty sure I read this cover to cover in 2002/3..time to revisit..
9. Long Way Round- Ewan McGregor and Charley Boorman. Read this too, revisit.
10. Planet Earth- BBC?
11. Tea Lover's Companion- this one is being given away unread, as I got quite bored.
12. Behind Closed Doors in Georgian England- Amanda Vickery. Loved the TV series-it's still saved on Sky+, but didn't progress far with the book.
13. Britain in Revolution- Austin Woolrych. Uni book, read small parts of it.
14. An Elizabethan Progress- Zillah Dovey. Work, not uni.
15. Tudor and Stuart Britain- John Morrill
16. Tournament- Crouch
17. Armies and Warfare- Prestwich
18. Medieval Warfare- Keen
19. NT Book of Castles
20. The Suffolk Landscape
21. History of Bury St Edmunds
22. Haunted Bury St Edmunds
23. Diary of John Longe
24. Savage Fortune
25. Suffolk Committees
26. Six Wives- David Starkey
27. The Tudors- A Short Introduction
28. The Family, Sex and Marriage- Lawrence Stone
29. Chivalry- Keen
30. Renaissance in Europe- King
31. Early Medieval Europe- Collins
32. England Under the Normans- Bartlett
33. Chapter of Kings
34. How to read buildings
35. Emma Darwin
36. English Civil War- Diane Purkiss
37. The Stuart Age- Coward
38. Medieval Women- Henrietta Leyser
39. Proceedings of the Short Parliament
40. Constitutional Documents of the Puritan Revolution
41. Stuart consitution
42. The Three Edwards- Michael Prestwich
43. The book of chivalry of Geffroi de Charney
44. Conflict in Early Stuart England- Cust and Hughes
45. Puritanism and Liberty- the Putney Debates
46. Anne Boleyn- The Lady in the Tower
47. Witchfinders- A Seventheenth Century English Tragedy- Malcolm Gaskill.
48. Newton and the Counterfeiter- Thomas Levenson
49. Elizabeth and Mary- Jane DunnThis book has been lurking on my bookshelf for years- maybe ten years or more. I should have read it sooner, as it was a fairly easy read, and very interesting, especially in the contrasts between Elizabeth I and Mary, Queen of Scots, due in part to their very different upbringings.
50. Complete Shakespeare (facsimile of 19th C illustrated copy) (I've read some plays, but would like to read them all eventually).
51. A Street Cat Named Bob- James Bowen Got this for Christmas (thank you Santa!) and read in in about two sittings. Not the most well written book in the world (perhaps because the author is a former homeless heroin addict- the story is not always totally coherent, and he is not a professional writer) but it contains a very interesting cat...and I am now looking at my three cats and saying 'why don't you lot ride on my shoulders?!' I can't imagine mine choosing to go busking in central London- they hide on the wardrobe as soon as I get the vacuum out, so I doubt that they would cope with all of the noise! 52. Wendy- Karen Wallace I was given this recently, and read it all in one go. Quite short, but I really enjoyed it. May in fact be a chidren's book,but never mind! Now, must get on with reading books that have been sitting around for a while...
So, pretty much all light reading there, then!

I also have unread Kindle books (yes, I am BRILLIANT at finishing things...) which I may read between the above to give a little light relief (ha!)


So... will be editing this to update what I have read/given up on and what I think of it.

Have you read any of the books on my list? Anything that is fantastic and I should really start with?