November 22, 2012
I thought that I didn't have many clothes (3/4 of a wardrobe and two small drawers), and so when one of my friends started this blog earlier this year about her wardrobe and clothes buying habits, I smugly thought to myself 'I'll count my clothes, I bet I have about fifty items.' I was SO wrong. I had 118 clothes/bags/pairs of shoes etc, 80 of which were clothing, 11 bags and 27 pairs of shoes. I may have forgotten to count dressing gown and coats. I've got rid of some stuff and added some stuff since then, but it's probably a pretty good estimate. Anyway, lest this descends into a weird counting game (which, as this this blog post points out, is a somewhat pointless obsession in some parts of the internet), I'm going to move on from the numbers...to, err, percentages.

Apparently, 80% of effects come from 20% of causes (the Pareto principle). This has been applied to many things, not least clothes- you will wear 20% of your clothes 80% of the time. You can test this by putting clothes to one end of the wardrobe once they have been worn and washed, and after a month, six months, a year, see what you have actually worn. I've never actually bothered, because it is pretty obvious that I wear about ten items of (outer) clothing. Jodhpurs, t-shirt, leggings, dresses. Pyjamas.

So, I've been thinking about the idea of a uniform. Not quite like my old school uniform (thankfully I quite like purple) but expanding on the fact that I already wear one dress to work most of the time (a hand-me-across from my friend at work- too big, but that can be sorted with a belt). It strikes me as being much more simple*, and would eliminate any remaining 'what shall I wear' staring at the wardrobe time. Plus, I just hate having excess stuff and a wardrobe that involves fighting with hangers. Bleurgh.

So- aside from what I shall loosely term 'sports clothing' (yoga, horse riding, 'running', swimming), I can't think of a situation where I would need anything other than leggings and a dress. (And underwear, of course).

I'm not planning on being quite as extreme as this, although the idea is tempting.

So, after the removal of one big ol' sack of clothes, the wardrobe looks like this: 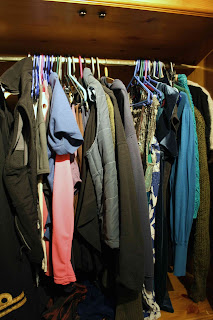 Everything from left (other than naval uniform which snuck in) to the gap is 'sports clothing' and pyjamas, i.e. where my nice clothes go to die. The stuff from the right to the gap is everything else, which consists of:


I feel some sort of challenge coming on...I think I might be inspired by Cat's idea for her blog (ok, I will just steal it) of not buying anything clothes related until my birthday (April) and getting rid of anything that I don't wear between now and then. (Other than the 'just in case' ball gown and 'going to weddings' blue and green dress). Because my wardrobe still looks full to me...

I'm not promising to post an outfit every day though, as she did, as a) that might get boring to read and b) I'm pretty good at procrastinating as it is...(which is definitely not obvious from the fact I have spent an evening photographing most of my clothes...)

My mum once made a New Years Resolution not to buy any clothes- and succeeded. Have you ever made clothes-based resolutions/taken clothes-based challenges?

*Any of you who know anyone in the military will know that uniform can also be made HORRENDOUSLY complicated. OK, you have little/no choice about what you wear, but I am fairly sure a week or two of basic training must be devoted to knowing the subtle differences between Number Ones, Number Twos (which can also come in Alpha, Brava, Delta, Gamma Ray flavour), Number Threes.. numbers 1-3 Tropical..camouflage in case you are in the jungle..oh, and civvies. Which is not technically a uniform, but appears to be chinos and NO JEANS.

Book review: Newton and the Counterfeiter

April 15, 2014
I really enjoyed this book- it was only about 250 pages long, so I whizzed through it. (Well, relatively- it took about a week). It describes the (relatively brief) conflict between Isaac Newton and William Chaloner. I knew shamefully little about Newton before starting this book (other than the obvious 'scientist who thought up gravity when an apple landed on his head'.) The book describes his early life, and rise to fame as a scientist. (Apples are barely mentioned). Later in life, he was appointed Warden of the Royal Mint, at a time when England's coinage was debased and in need of re-minting. Part of his role as Warden was to chase down anyone who was counterfeiting coins- this was punishable by death, as it was considered treason against the monarch (whose face was on the coinage). Thus, Newton came into conflict with counterfeiter William Chaloner, who first came to London as a runaway apprentice, trying to make his fortune. (One of my favourite parts of the b
3 comments
Read more